Adventures of Sonic the Hedgehog Iceberg 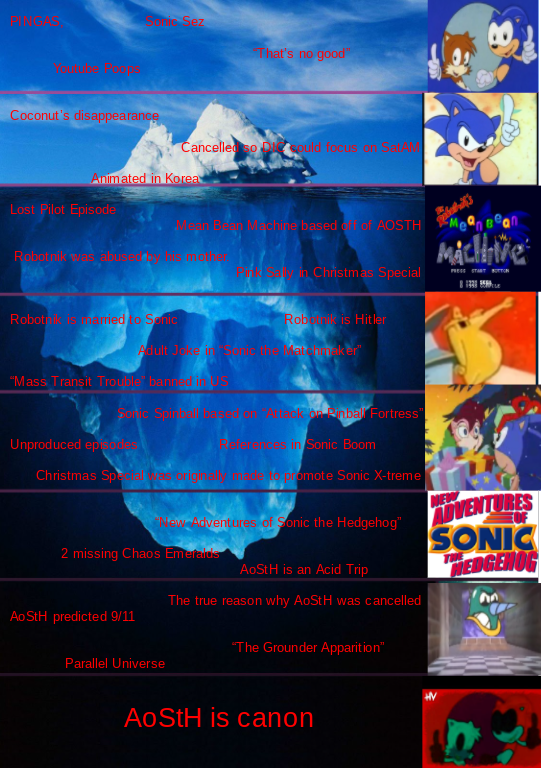 Second Layer:
- Coconut's dissapearance: A reoccuring character in the earlier episodes, but stopped showing up as often as the show progressed.
- Cancelled so DIC could focus on SatAM: AoStH was cancelled by DIC so they could put more time in effort into their other Sonic cartoon, SatAM.
- Animated in Korea: AoStH was animated in Korea.

Third Layer:
- Lost Pilot episode: The complete pilot of the show is lost, but we do have an incomplete copy that's missing the music and some voices.
- MBM based off of AoStH: When the puzzle game Puyo Puyo came to the west, it was reskinned as a Sonic game, based off of AoStH.
- Robotnik was abused by his mother: The only person that Robotnik is scared of in the show is his own mother. We also constantly see Mama Robotnik yelling and punching Robotnik.
- Pink Sally in Christmas Special: In the Christmas Special, a pink Sally makes an unvoiced cameo in the beginning and the end.

Fourth Layer:
- Robotnik is married to Sonic: In the episode "Best Hedgehog", to prevent some girl from being married to Robotnik, Sonic dresses up as the bride and tricks Robotnik into marrying him.
- Robotnik is Hitler: The statue of Robotnik that's next to his lair appears to be doing the Nazi Salute. Also Robotnik occasionally dresses up in an outfit that's simular to a Nazi uniform.
- Adult Joke in "Sonic the Matchmaker": https://youtu.be/NKQM37YHKzo?t=545
- "Mass Transit Trouble" banned in US: An episode that was banned due to it's content matter being that Robotnik tries to bomb a train station, an airport, and a lighthouse. It was banned in 1993 due to the WTC bombing, and then again during 9/11.

Fifth Layer:
- "Attack on Pinball Fortress" based on Sonic Spinball: Sonic Spinball inspired the episode "Attack on Pinball Fortress" (sorry that it's switched around on the iceberg)
- Unproduced Episodes: The wiki mentions that there are unproduced episodes.
- Refrences in Sonic Boom: There are a few refrences to AoStH in the Sonic Boom Cartoon.
- Christmas special was originally made to promote Sonic X-Treme: self explanatory.

Sixth Layer:
- "New Adventures of Sonic the Hedgehog": The wiki mentions the existance of a "New Adventures of Sonic the Hedgehog", and it supposedly released in 2019, but there's no other proof that this ever existed.
- 2 missing Chaos Emeralds: There's a 4-parter special about Sonic trying to get the Chaos Emeralds before Robotnik does, but there are only 4 Chaos Emeralds in the show instead of the 6 in the games. - AoStH is an acid trip: The show can feel like that you are on acid sometimes.

Seventh Layer:
- AoStH predicted 9/11: As mentioned earlier, the episode "Mass Transit Trouble" was banned, maybe the episode predicted 9/11?
- The true reason why AoStH was cancelled: Who knows... ¯\_(ツ)_/¯.
- "The Grounder Apparition": Legend says that in a few personalized AoStH VHS tapes, the Grounder Apparition is there, waiting, to haunt your nightmares...
- Parallel Universe: AoStH may take place in an alternate universe.

Hell:
- AoStH is canon: A few thing from AoStH have been canonized, such as Sonic's favorite food being Chili Dogs.

Feel free to share this, just credit me for making it.